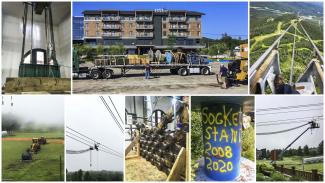 We are happy to announce the The Return of the Tram is right around the corner, beginning Saturday, September 5th. Public Tram Rides will be available on weekends through October 11th, beginning at 10am with the last ride up at 5pm. It will run at the top and bottom of every hour with more frequent trips added as needed. Plus we'll offer Tram rides on Monday, September 7th (Labor Day) and Monday, October 12th (Indigenous Peoples' Day). Through the fall our maximum number of passengers is 15 per cabin. Tickets are $15/person and will be available for walk-ups at the Hotel Jay front desk (or Provisions General Store when open). Advance online tickets are coming soon.

In the meantime, our Lift Operations team has been hard at work with their annual routines. This year, their summer to-do list has been a little larger thanks to some interesting Tram maintenance that happens every 12 years. We connected with our Director of Mountain Operations, Walter Elander, to learn more about slipping the track ropes on the Tram.

Tell us a little bit about the Tram's track ropes and what it all means.

The way that the Tram cabins move up and down is by rolling along cables called track ropes. Each Tram car moves on two track ropes and these cables are stationary. The arms that connect each Tram cabin to the cables above are called carriages, and each Tram carriage has two sets of wheels that roll on the track ropes. This is similar to how a train car rests and moves on its rails, or at least it's the same theory. There is a third cable located between both sets of track ropes called the haul rope, and the haul rope is actually the cable responsible for moving the Tram up and down over the track ropes.

Now that we've identified the important pieces, what's the process like?

So every twelve years, by code, we are required to move (slip) the track ropes. Given temperature variations and wind action over time there's a very slight amount of movement and wear to the track ropes and several bronze brackets that sit on the saddles (the long arching pieces at the top of each Tram tower). This is the section where the Tram cars pass over the towers. Just to be safe we check the brackets and adjust the track ropes. We actually slip each of the four track ropes about 50 feet down the hill in order to reposition the sections of cable that pass over the towers. We can do this because there is plenty of extra cable living at the summit in the Sky Haus, wrapped around giant spools called bollards. When trams are built, they are installed with enough additional cable to allow for slipping a number of times over several decades.

The project took about 5 weeks for our team to safely complete. It requires a lot of very high level rigging in order to hold the massive amounts of weight and keep the track ropes stable while we move them.

Are there any other Tram maintenance projects happening this summer?

Every three years we are also required to take apart and inspect the sockets on the haul ropes. These sockets are basically the end pieces located on each of the haul ropes. This year, we fully replaced all four sockets (two per side).  Additionally, we've replaced the bushings and the bearings on the Tram's bullwheel at the summit, and now we're replacing the bushings and the bearings for the bullwheel at the base, before we open to the public Labor Day weekend.

From all of us at Jay Peak, we hope you enjoy the ride, and we look forward to seeing all of your lovely fall foliage photos.